One of the major investment projects in 2011 – 2012. is the acquisition of a new calender line for the production of conveyor belts. The design of the line was developed by specialists of the company “Uth GmbH”, Germany, by special order of OJSC “Kurskrezinotekhnika”. The line is a unique combination of the world’s best equipment – a four-roll calender made by the English company “Farrel” with hydraulic adjustments for the gap of the calender rolls and a system for non-contact carcass thickness control (automatic scanner “Essair Reflex”) by the Italian manufacturer “Electronic Sysmes S. p. a. “.

The goal of this project is to manufacture high quality conveyor belts that meet international standards. The new line will allow OJSC Kurskrezinotekhnika to significantly increase the existing production capacity for the production of conveyor belts, expand the range, and increase its presence in the domestic and foreign markets.
Acceptance of the equipment, in accordance with the terms of the contract, is scheduled for June, installation and commissioning of the calender line – for September 2012.
By the end of this year, OJSC “Kurskrezinotekhnika” will hold a presentation of the new line for all consumers of conveyor belts. 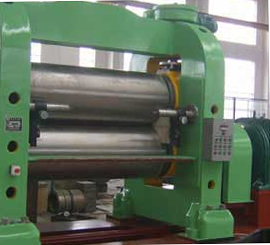