Today, the most acute issue for the consumer is the energy efficiency of the used conveyor belts. This direction has become the main vector of development of world manufacturers of rubber goods.

Over the past 2 years, the specialists of JSC “Kurskrezinotekhnika” have carried out a complex of research and development work on the possibility of producing energy-efficient types of rubber goods due to modernized structures and the use of new materials. As a result, Kurskrezinotekhnika OJSC was the first among Russian manufacturers of conveyor belts to develop a belt frame based on special fabrics that were not used before, with improved rubber compounds. This made it possible to reduce the weight of the tape while maintaining the strength characteristics without increasing the cost.

Operational tests of the new conveyor belt were carried out at the Saratov Building Materials Plant (ZAO SZSM).

As a result of the tests, a significant positive dynamics was noted in terms of the characteristics of the belt and the condition of the conveyor transport:

1) the lengthening of the conveyor belt was no more than 0.5%, which made it possible to avoid equipment downtime associated with additional belt tension.

2) the reduced weight of the conveyor belt allowed to reduce energy costs due to:

In the 1st quarter of 2014, OJSC Kurskrezinotekhnika plans to start serial production of belts with reduced load on conveyor system elements for light and medium operating conditions. 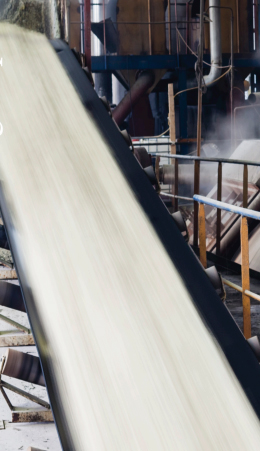