Main / What's new / Start up of the new calendering line

Start up of the new calendering line

On January 30, 2013, Kurskrezinotekhnika OJSC hosted the first of a series of planned presentations of the opening of a new calender line for the production of high-strength conveyor belts with representatives of the largest mining and metallurgical enterprises: Lebedinsky GOK OJSC, Stoilensky GOK OJSC, Mikhailovsky GOK OJSC “, Oskol Metallurgical Plant OJSC, METALLOINVEST Management Company LLC, NLMK Trading House LLC, as well as representatives of the Kursk administration and the owners of KRT OJSC.

This investment project provides for the construction of an industrial building and the creation of a rubber-fabric conveyor belt on its premises, with an annual output of 1,200 thousand square meters per year.

A distinctive feature of this project is a complex installation for the assembly of a conveyor belt blank and a specialized installation for the preparation of a heat carrier for vulcanizing presses, which is for the first time supplied to Russia, operating in an optimal energy saving mode. This will significantly reduce the specific energy consumption per unit of output.

After the successful implementation of the project, JSC “Kurskrezinotekhnika” will have modern equipment and advanced technology, it will be possible to manufacture conveyor belts that meet the requirements of international standards. And also, it will provide an opportunity for the development and production of conveyor belts for special operating conditions with a significant resource for reliability.

Years of many years of cooperation with these consumer enterprises determined the importance and significance of an event of this scale.

Our partners were able to get acquainted with the new products, new equipment, as well as the development prospects of Kurskrezinotekhnika OJSC as part of the Rubex Group holding.

As a result of the meeting, a round table was held, where issues of expanding cooperation, strengthening business ties were discussed, the topics of import substitution of rubber goods used in the technological chain of production of consuming enterprises in connection with the emerging opportunity of JSC Kurskrezinotekhnika to produce conveyor belts of type W and X, corresponding to the world quality standards. To demonstrate the characteristics of the new product, bench tests were carried out taking into account the requirements of European quality standards.

In conclusion, all those present from the consumer side noted the importance of holding such events to strengthen cooperation, open partnerships. 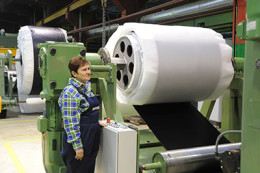