Heat-resistant conveyor belts with a temperature of the transported material over 2000С.

In world practice, to increase the temperature resistance and increase the wear resistance of the upper lining of heat-resistant conveyor belts, it is proposed to use a metal mesh. In this case, the cost of the tape itself and its weight increase sharply. At the same time, the problem of heat removal during the transportation of hot bulk materials has not been resolved, since the metal mesh itself is heated and the rubber and fabric base under it is destroyed.

To solve the problems with increasing the temperature resistance of conveyor belts, the specialists of JSC “Kurskrezinotekhnika” proposed the use of composite fabrics. The operating temperature of such materials is 750C – 800C, thermal conductivity is minimal, sparking during the operation of the tape is absent, which allows its unhindered use in mines and other hazardous industries.

The materials used have a comparable cost to commercially used fabrics, which increases the attractiveness of such products for the consumer.

There are no analogues of conveyor belts with composite materials in Russian practice.

Today, a conveyor belt with improved heat resistance is undergoing operational tests at one of the largest metallurgical enterprises in Russia. Interim inspections, which take place every 2 months, show a significant positive trend in performance.

The end of the tests is scheduled for March 2014, the results will be additionally reflected in the press releases of the Rubex Group.

In the 2nd quarter of 2014, OJSC Kurskrezinotekhnika plans to start serial production of conveyor belts with a temperature of the transported cargo over 200C. 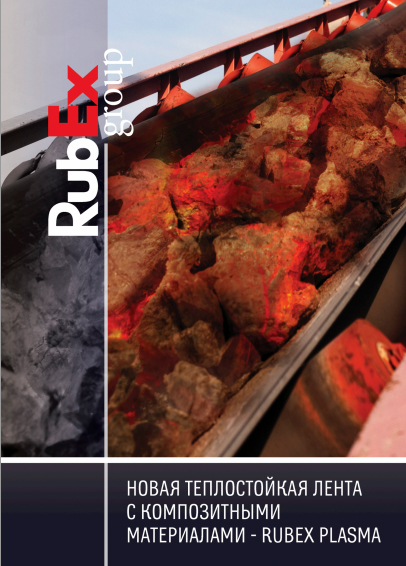